Indian states of Tamil Nadu and Kerala. It is the state animal of Tamil Nadu, Kerala’s neighbouring state. It is also known by the name Nilgiri Ibex or simply Ibex. Locally the animal is called ‘Varayaadu’.

Its closest relatives are the sheep belonging to the genus ‘Ovis.’ The Nilgiri Tahr is different from the other species of Tahr namely the Himalayan Tahr and the Arabian Tahr.

The Nilgiri Tahrs are stocky goats with short, coarse fur and a bristly mane. The males are found to be larger than the females, and have a darker color when mature. Both sexes have curved horns, which are larger in the males, reaching up to 40 cm in males and 30 cm in females. The horns of the females are shorter and more slender. Adult males weigh 80–100 kg and stand about 100 cm tall at the shoulder. Adult females weigh around 50 kg and stand 80 cms tall at shoulder height. Adult males develop a light grey area or ’saddle’ on their backs and are hence called ‘saddlebacks’. The Nilgiri Tahr has a short grey-brown or dark coat. There are facial markings, particularly distinct in mature males, consisting of a dark brown muzzle separated from a dark cheek by a white stripe running down from the base of horns. Females and immature males are an overall yellowish-brown to grey, with the underparts being paler.

These Tahrs inhabit the open montane grassland habitat of the south western ghats montane rain forests eco region. At elevations ranging from 1200 to 2600 m, the jungle 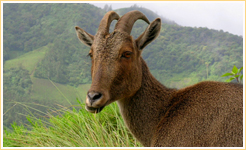 opens into grasslands interspersed with pockets of stunted forests, known as ‘sholas.’ These grassland habitats are surrounded by dense forests at the lower elevations. The Nilgiri Tahrs formerly ranged over these grasslands in large herds, but hunting and poaching in the nineteenth century reduced their population to as few as 100 animals by the early 20th century. Since that time their populations have increased somewhat, and presently number about 2000 animals. Their range extends over 400 km from north to south, and Eravikulam National Park is home to the largest population. The other significant concentration is in the Nilgiri Hills, with smaller populations in the Anamalai Hills, Periyar National Park, Palani Hills and other pockets in the western ghats south of Eravikulam.

The Nilgiri Tahr is an endangered species listed in Schedule I of the Indian Wildlife (Protection) Act 1972 and assessed as endangered by the IUCN using the 1994 Red List Category.

Having been exterminated from the northernmost landscape, the high altitude grasslands of southwestern Karnataka during the past 50 years, the Tahr is at present found only within 6 high altitude landscapes. And within these 6 landscapes, 18 localities have sustained small to large populations that vary in size between 20 and 550 animals. Estimates made at various times during the past 30 years placed the population size of the Nilgiri Tahr between 2000 and 2500 over its entire range.

It is evident that the Nilgiri Tahr had reached the brink of extinction sometime during the latter half of the 19th century. Early interventions by the erstwhile Nilgiri Game Association and High Range Game Association as well as modern conservation initiatives guided by the Indian Wildlife (Protection) Act of 1972 have aided a rather dramatic comeback of the species in less than 150 years. A rough estimate would 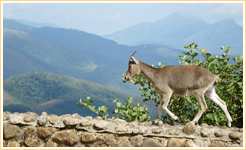 The reason for the rather local distribution of the Tahr is its preference for a habitat that is predominantly of grasslands adequately sheltered by steep rocky cliffs; a unique habitat type that has rightly given the species the local name meaning ‘Cliff Goat.’ These grasslands receive not less than 1500mm of rainfall annually and enjoy a short dry season and as such are restricted to just 7 high altitude landscapes (1200-2600m ASL) in the southern Western Ghats.

The main breeding season of the wild Nilgiri Tahr is from June to August during the monsoons. Conception is for a period of 6 months. A peak in births occurs in January and February. A new born Tahr is called a Kid. By two months of age the kid follows its mother but they are not weaned until four to six months. Sexual maturity occurs at around 16 months. The average life expectancy of the Nilgiri Tahr in the wild is estimated to be only three or 3.5 years, although their potential life span is at least 9 years.

Ways are being determined to strengthen the ongoing scientific conservation initiatives. The suggestions include control of poaching, extending strict protection measures involving participation from the local community, assessment of quality of habitats for their long term suitability and sustainability, and dedicating more areas for its preservation by declaring an exclusive Nilgiri Tahr sanctuary.